Sometimes magic happens when we take unexpected routes. Today when I went out for a run I decided not to follow the well-trodden comfortable running route, opting to plunge into the dewy grass instead. I did not think I would get as drenched as I did – from afar dew just looks like harmless droplets, yet as I kept going  my shoes felt heavier and heavier, squelching as though I was walking through a marsh. 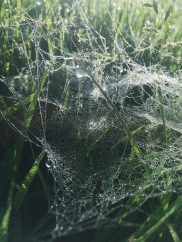 So I took off my shoes and walked barefoot . It felt like walking through a cool stream, there was that much water. It was the same feeling of sudden freezing water when you just jump into the sea, with the fast adjustment of your skin warming up and then the sensation of the pleasant calm cool of the dive.

Suddenly the grass was seaweed, the cobwebs were coral reefs, the hedgehogs sea urchins. But the sounds differed, as under water everything turns into soft edgeless vibrations, whilst here you could hear the  sprightly racket of birds.

Many small droplets can make a sea.