I went to Armenia with my friend about a week ago and I absolutely loved it! The culture is so ancient and mesmerizing and the mentality of the people is completely different! 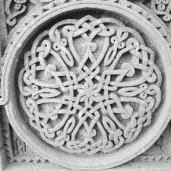 The first thing one must do when visiting Yerevan is to climb up the Cascade: a stone staircase in the middle of the city, which had begun to be built in the Soviet era. The atmosphere at the bottom is pleasant and cheerful as many young people mill around, laughing and chatting to each other. You make your way up to the first floor and see many  entertaining modern art sculptures scattered everywhere. These pieces of art are placed everywhere, from ordinary streets to contemporary art centers, like the inside of the Cascade itself.

By the third floor you already feel sweaty and tired, but the promise of a breathtaking view motivates you to carry on. Only a few more flights of steps left, you’re getting higher and higher, closer and closer to the blue sky that towers above your head, the fluffy white clouds lazily drifting past…

Coming from the huge metropolis of Moscow, my first impression of Yerevan was that it was a relatively small city. Yet, when I climbed the infinite staircase of the Cascade to the top, I realized I was wrong when I saw the city spread out like a map in front of me: buildings of all shapes and sizes lined the streets, people running around doing their jobs, shops selling flowers and icy lemonade… You cannot help but notice that most of the houses are made of a distinctive pink stone, Armenian tuff, which has endless variations of shades and tints of pink.

You can also see the famous  snowcapped mountain, Ararat, looming above everything in the distance. I know a funny story about this one! At the time of the Soviet Union, the Armenian flag had Ararat drawn on it, and since Ararat was technically on Turkish territory (it still is), the Turks complained that the Armenians had no right to put the mountain on their flag. What did the Armenians say in reply? The Turks had the moon on their  flag, and the moon was by no means theirs! Everything was settled.

Another thing you can see clearly is the grand statue of ‘Mother Armenia’ looking down lovingly on her city. She looks serious but kind at the same time. Looking up, you can see the tall stele-like monument with a gold leaf on top, which was put up to commemorate Soviet Armenia’s 50th anniversary. Of course they couldn’t take such a marvelous thing down even though the Soviet Union collapsed and Armenia is independent, unlike the statue of Stalin which stood nearby Mother Armenia. 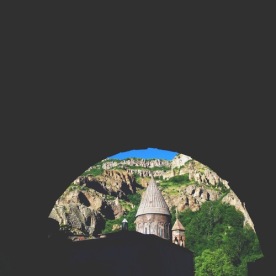 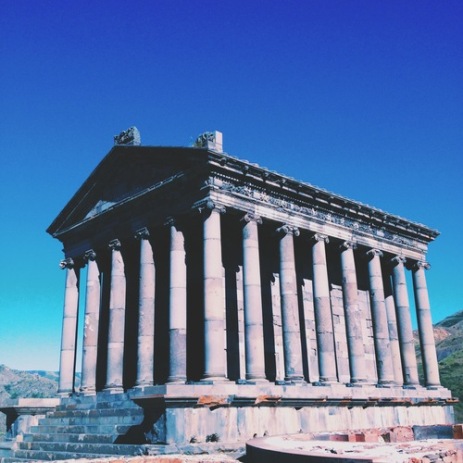 The Gegard church really is a stunning sight. It is extremely old, the whole church carved out of a single rock. A sudden calm comes over you as you step into the darkness, the cool air seeps into your bones, the silence inside engulfs you and you cannot help but marvel at this miraculous construction.  Candles line the walls, the only source of light, and the only thing you can hear is the trickle of water coming from a small hole in the wall. You reach out to the water and it turns out to be so icy, your fingers go numb from the cold. In the dim candlelight you can barely make out the walls engraved with various symbols you don’t understand, patterns of scrawling handwritten texts and intricate carvings of flowers and stars of some kind.

Garni temple is the Armenian Acropolis, a smaller version of the one in Athens but equally beautiful. It stands, all alone in the valley of numerous mountains, and you can almost feel the time-worn stone whispering century old secrets into your ear. Unlike the other churches, it has no decorations inside  whatsoever, but this adds its mysterious ambiance, as if time robbed this temple of its many riches it once possessed.

This country is mysterious, extraordinary and incomparable to any other country I have ever been to. Every place is unique in its own way but Armenia really is a nation every traveler must get a glimpse of…

6 thoughts on “My trip to sunny Hayastan! (Armenia)”